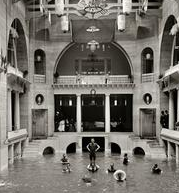 Hotel swimming pool as Olympic tryout facility? This is very cool. Apparently in the 1920s, the Women’s National Amateur Athletic Union Swimming Championships were held at the pool of a St. Augustine, Florida hotel.

Now it’s a restaurant, Cafe Alcazar. But back in the late 1800s, it was called the Ponce DeLeon Hotel and it housed the world’s largest indoor pool at the time.

“At 120 feet long and 50 feet wide, the pool was the site where women swimmers from the Southeast U.S. competed in order to go to the Olympics in the 1920s.”

How cool would it have been to have seen that?